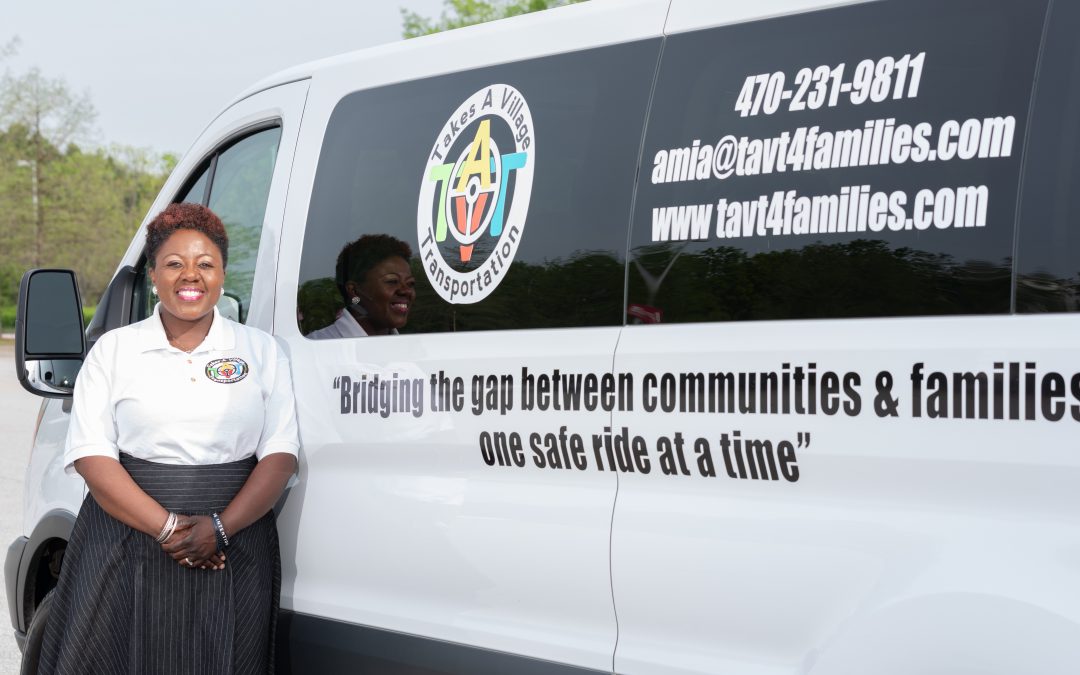 As a mother of four navigating Atlanta rush hours, Amia Guild understood the challenges of transportation. “It can be hard to work a full day and go from one end of town to another,” she said. She was always quick to lend a hand to friends and neighbors who needed a lift.

One afternoon, she showed up at school where kids were congregated outside. “This child asked me if I was his Uber,” she recalls. “It was a scary moment because I realized anyone could show up pretending to be an Uber, and the child would get in the car. I had this vision that families with children need safe, reliable transportation.”

So, in 2015, with one van and inspiration from an old African saying, she established Takes A Village Transportation – “I knew that personally it took a village to help me raise my children!”

Guild started with two students from Brookwood Academy. She wanted to be more than a glorified taxi service, though, so several features set her business apart. Only authorized persons on signed release forms could receive children from school and extracurricular activities; she kept a log for passenger pick-up and drop-off; she was certified in first aid and C.P.R.; and no cash was kept on hand.  All children had to be strapped in with seat-belts and safety boosters, too.

By the following year, she had six regular clients, and then in 2017, she bought an additional 15-passenger van. By 2018, students were lined up on a waiting list, and she hired her first employee. Guild clearly was meeting a need in the market.

ACE helped her take her business to the next level. “The bank wouldn’t help me with capital, but ACE would,” she says. “It was so much more than capital, though.” ACE set her up with seven sessions with a business coach and helped her enroll in an intensive, six-month strategic planning workshop at Atlantic Consulting Solutions. “My business quickly went from yellow to green,” she says. “I learned how to balance my books, I hired an accountant, I learned about bottom-line revenue.”

She bought an additional 15-passenger van that has room for luggage for shuttling to the airport and back. Today, she has three vehicles that serve 32 students regularly, and she employs two drivers – who wear crisp  uniforms — with plans to add two more in the autumn. “I want more boots on the ground,” she says, “so I will drive only as needed.”

ACE also helped Guild investigate the certifications she needs to grow. “I am working toward the Georgia Department of Safety Certification that will help me build revenue because I can walk into any school or government contracting agency to assess opportunities.”

So Guild may observe the speed limit, but she is definitely in the fast lane of entrepreneurial growth. “I believe I was called by God to help families with children,” she says, “and ACE is enabling me to do that.”