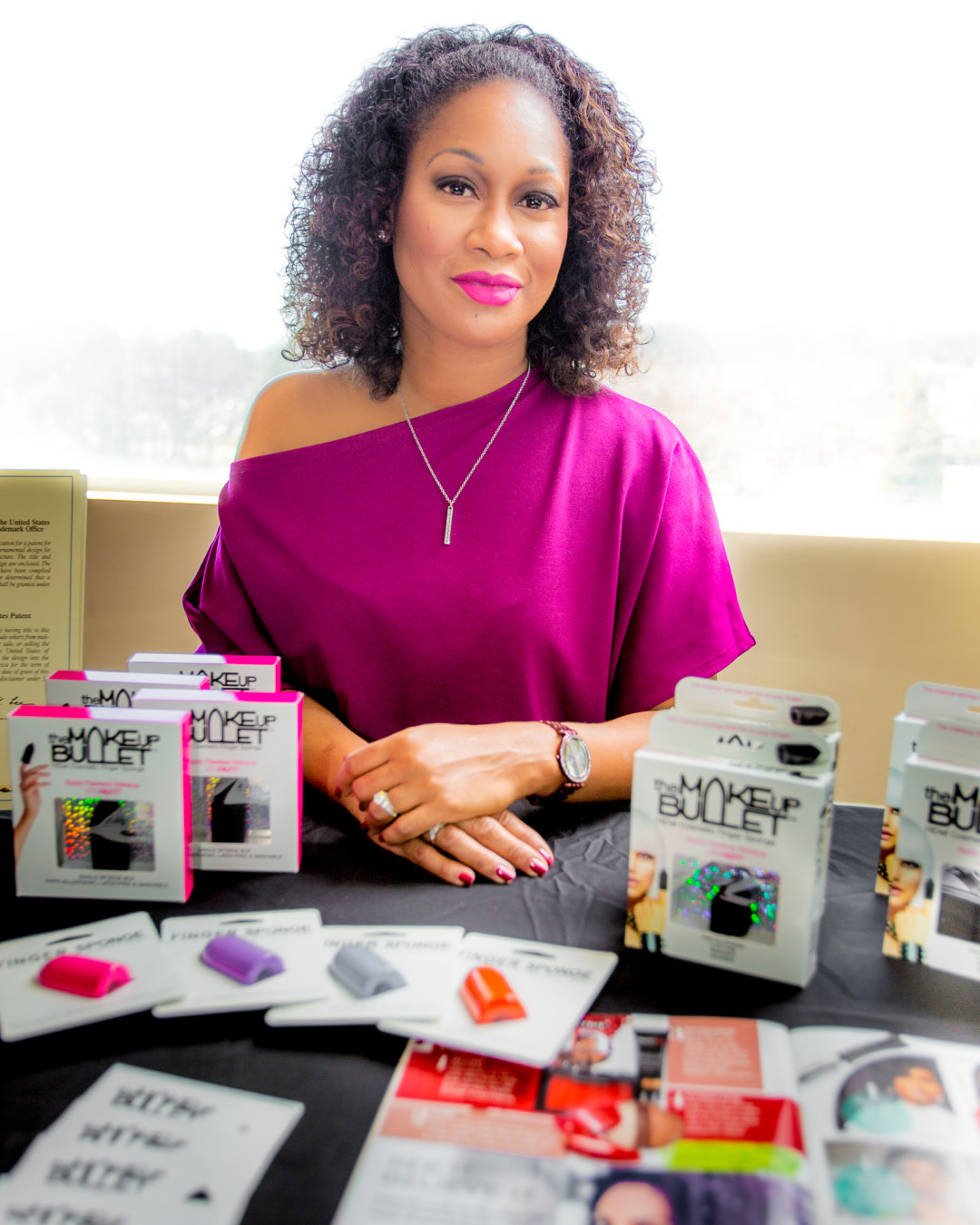 Eva Jane Bunkley, the creator of The Makeup Bullet, a practical beauty sponge and makeup applicator that fits snugly on a finger while providing smooth coverage, is a firm believer of the perfect timing, or God’s timing. She had been a busy and successful makeup artist in Atlanta, working for news organizations like Fox affiliate WAGA, the NBC affiliate WXIA working for its morning show Good Day Atlanta, at a local Christian broadcast for 11 years, the Judge Hatchett show where she went to New York for 10 weeks to do one season of the show, and other gigs. It was during her time working in local news that she earned two Emmy Awards: one in 2001, and again in 2002 for her makeup work. During that time, Eva had an idea of a product that solved an issue she was having. She brainstormed it, researched it and put it in writing. She had a friend who was a seasoned makeup artist so she asked her to meet to present her idea and get her feedback. A non-disclosure later, she explained her idea, but to her surprise, her friend wasn’t feeling it. “mmm Eva, I’m not sure I’d like that” she remembers her friend saying.

Eva thought maybe this was not the most amazing thing that she thought it may be, a little saddened but pragmatically she pushed the idea aside. 7 or 10 years later went by when she was on the board of an organization called Makeup Artists of Atlanta, during one of the panels she was on, Eva met a young lady that worked for a company that manufactured cosmetic brushes and did private labeling for some of the big brands. She thought back to her idea that was on hold but had never left her heart. Again, Eva asked this lady if she could meet with her to show her what she had in mind and get her feedback. Eva went on to explain that when she was working, stuff is all over the place and she would constantly either lost track of items or dropped something. Her makeup sponge was the thing to go to make a correction, smooth something out, or to work some products together, if it stayed on her finger that would be one less thing to be looking for and that would help speed up application time when she worked on a client or even working on herself. This time around the response Eva got was the one she was waiting for “Eva, I’ve been to makeup shows all over the world, and I’ve never thing anything like that. You could be seating on a gold mine, you need to do this now”.

With the reassurance from an expert in the beauty field Eva went on to patent and manufacture The Makeup Bullet and has had a great response from customers and peers. When she reached to ACE Women’s Business Center, she was looking for networking opportunities and she attended a 90-Second Pitch workshop hosted by the WBC. She found the information valuable and later decided to participate on a Pitch competition ACE was planning in collaboration with the SBDC office of Minority Businesses in September 2016. She attended the practice sessions and worked along the center’s pitch coach in preparation for the event. Eva obtained the third place and a prize of $350. Since then Eva has had many platforms to show her product, The Makeup Bullet is being sold at Dillard’s, she took part of the biggest beauty show in Italy, and has been feature in TV shows and fashion magazines. Her prospects are promising and she recently came for a one on one consultation to learn her option in terms of capital needed once those deals come to fruition. About her experience with the WBC Eva compares it to her board of trustees “It is like I am filling out my board of trustees, I don’t have a formal board yet but if I did, these are the people that I would want. You are a bridge to any information I need, and as an entrepreneur that is invaluable”. At the center, Eva was encouraged to participate in the InnovateHER challenge, a competition sponsored by the SBA calling to women entrepreneurs who have a product that is innovative, has market potential and impacts the lives of women and or children. No doubt her Makeup Bullet will make its mark if she decides to compete.